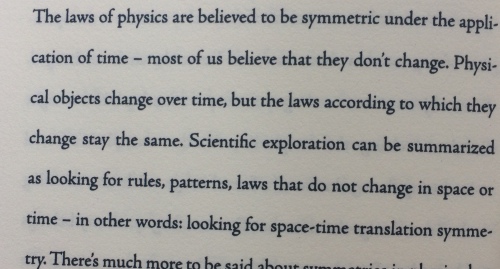 Economics is often presented — and lamented — to be beset with different difficulties than other sciences. Most commonly it’s contrasted with physics. To state the obvious: economics is different, otherwise we would just call it physics. But the perceived qualitative difference has often more to do with a naïve understanding of physics than with a fundamental difference in epistemology. But, I hear the objection, economics is self-referential: so are biology and medicine — sciences conducted by their objects of study. So is physics, for that matter — what am I if not a curiously arranged pile of fundamental particles? Ok, but things are not stationary in economics, so it really is different. Well — no. Nothing is stationary, said Heraclitus — a truth that never budged.

Let’s look at something concrete: Newton’s laws (also in our lecture notes). They can be written down in ink, as valid today as they were in 1666 — and yet they don’t invalidate Heraclitus, describing, as they do, all those swirling ever-changing galaxies around us. Take Newton’s second law

, force is mass times acceleration (second time-derivative of position). It can be written down in ink, so something is stationary. What exactly is that? The stationary thing, really, is a relationship among concepts. The equation describes something very non-stationary.

So no, stationarity — invariance, constancy — doesn’t exactly stare us in the face when we look at physics. Unless we’re Newton or Lagrange or Hamilton or Emmy Noether.

Newton was looking at positions,

, and how they behave over time. His genius allowed him to transform positions until he found something stable about them.

More recently, there has been a trend in physics of appreciating non-stationarity. It’s an interesting change of perspective. If we can put things down in ink, we must have transformed away the changes in the world (that’s the green line in the figure above). But we can also leave the changes as they are and illustrate them (that would be the blue line). The second perspective focuses the mind on non-ergodic concepts, for example ageing in statistical mechanics, and sometimes it’s easier to think that way.

The stationarity debate is HUGE in economics, conducted under various labels (stationarity, ergodicity, stability, equilibrium). Samuelson famously said that not hypothesizing ergodicity “takes the subject out of the realm of science into the realm of genuine history.” This statement is not incorrect, but sometimes it’s interpreted in a way that comes close to sabotage.

Having spent some time totally puzzled by Samuelson’s statement, the way I think of it now is ‘Find what may sensibly be modeled as ergodic’, whereas the sabotage-interpretation is ‘take any old thing and model it as ergodic.’ But the former is hard work! Look what Newton had to do to get invariance! In economics it’s even worse because we have to model fickle-minded humans. What can I say? Tough.

Economic “laws” may not be as good as the laws we’ve found in other fields. Plausible regularities may be present but swamped by changes in attendant circumstances. The regularities we find may not predict what happens tomorrow but rather provide stable relationships between quantities, while the quantities themselves change. Think of Pythagoras’ theorem: it doesn’t tell us the hypotenuse is five feet long, it just puts it in relation to the catheti.

If we do the search for the laws properly — keeping track of both our knowledge and of our ignorance — then perhaps we will learn when the laws are practically meaningful and when not, or when a computer simulation may be useful and when not.

But this problem of being on shaky ground is not limited to economics. Scientific progress in general operates on the frontier of discernible laws. We think we see something, and then it turns out to be a fluke. Sadly, that’s the nature of the beast (more on reproducibility here).

Story-telling in history and science

The juxtaposition of science and history in Samuelson’s statement is curious. What’s that about? How are they related? Through story-telling, I contend.

One part of history is recording what happened. Because what happened is in the past, we can be certain that it won’t change. An easy victory for ink, one might think. But alas! what should be written down, and how? Berthold Brecht wrote: “Caesar defeated the Gauls. Did he not even have a cook with him?” It’s not possible to write down everything that’s happened. Quite the opposite: we have to leave out almost everything, because we have to condense what happened to a manageable volume.

As we do this — whether we like it or not — we impose a narrative. In some way, far beyond recording events, we make sense of them. This sense-making may be futile in history. History doesn’t repeat itself (how often have I heard that phrase!). But we cannot not do it — expose patterns, regularities, something stable in the facts of the past. Some law.

Impossible as it is, history emphasizes recording past events. Naïvely, ink is a good medium for that because of the curious nature of time. Things in the past don’t change, whereas things in the future — let’s say they’re more flexible. I say naïvely because what we include in today’s narrative derived from the past may not be included in tomorrow’s narrative derived from the same past. History is constantly being re-visited.

in ink. But science emphasizes the shape of the curve left by those past events, the story rather than the history.

History and science are related. History may try to stay away from story-telling. Where it does, it must fail because of grammatical constraints imposed on its language — Cormac McCarthy wrote recently “At some point the mind must grammaticize facts and convert them to narratives.” Science celebrates story-telling. Science becomes science when we invent a narrative and turn data into story, ink splashes into a parabola.

That’s a good place to end: the London Mathematical Laboratory quite literally celebrates story-telling, in collaboration with the Barbican, namely in the form of our Science on Screen program. Let scientists collide with on-screen stories — the results can be astonishing.